The Japanese Yen and the US Dollar have both seen considerable haven bids as the coronavirus’ spread has floored risker financial market bets worldwide. However, in the ‘haven battle’ between the currencies, the Japanese unit seems to be winning.

Admittedly USD/JPY managed to bounce this month from the viral-crisis lows which saw it reach depths not previously seen since late 2016 on March 10. 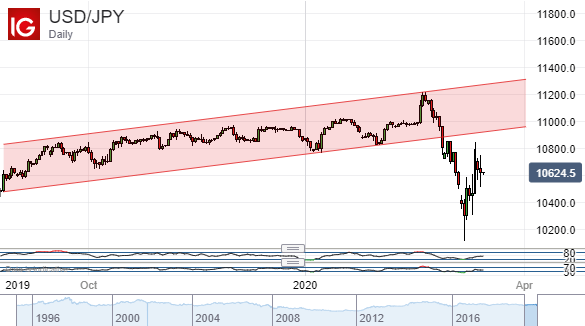 However, that bounce has yet to seriously approach the previously dominant uptrend channel broken so conclusively in the sharp falls from late February’s highs. The volatile nature of current markets makes prediction extremely difficult, but the market likely faces a considerable near-term resistance point at the 108.58 level. That was where the last modest upward foray petered out on March 2 and near-term failure to regain that mark will probably signal another leg lower, with March 10’s closing high of 105.01 probably offering support.

Near-term volatility aside, however, the pair’s longer downtrend remains very much in place. 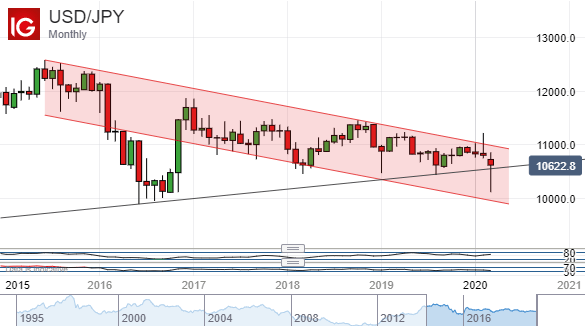 The long monthly chart downward channel on from June 2015 remains dominant and is in any case only an extension and acceleration of the move lower evident since July 1998.

This month’s action has already seen prices probe below the more recent uptrend line from mid-2016 and an eventual close below that this month could be telling.

The Australian Dollar meanwhile lies at the opposite end of the risk spectrum, being the major traded currency perhaps most correlated to global growth prospects. With Australian monetary policy expected to loosen further in the face of the virus’ effects, it should be no surprise that the Japanese Yen’s permanently loose monetary settings are starting to appear less of a handicap.

AUD/JPY is duly back to lows not seen since the world began to edge out from under the financial crisis cloud back in March 2009. 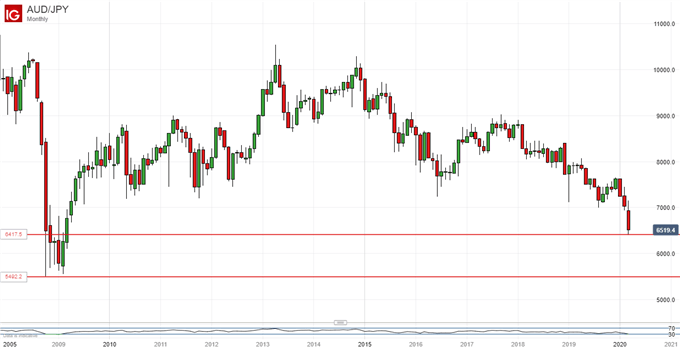 A sustained bid for the Aussie looks highly unlikely for as long as viral headlines command the news cycle, with further falls toward the financial crisis lows of 55.20 possible. That lower bound support barrier may be considerable, however, as it also held firm on its last test.

Whether you’re new to trading or an old hand DailyFX has plenty of resources to help you. There’s our trading sentiment indicator which shows you live how IG clients are positioned right now. We also hold educational and analytical webinars and offer trading guides, with one specifically aimed at those new to foreign exchange markets. There’s also a Bitcoin guide. Be sure to make the most of them all. They were written by our seasoned trading experts and they’re all free.

Follow David on Twitter@DavidCottleFX or use the Comments section below to get in touch!